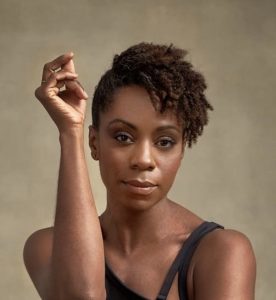 A native of the Bronx, New York, Michelle Fleet began dancing at the age of four under the tutelage of Lee Aca Thompson, she continued her training at Ballet Hispánico, while attending Talent Unlimited H.S. Michelle Fleet earned her B.F.A from the Conservatory of Dance at Purchase College. Ms. Fleet joined Taylor 2 in 1999 and made her debut with the Paul Taylor Dance Company in 2002. During her 18 year tenure with the Paul Taylor Dance Company Ms. Fleet performed in 72 works in over 90 various roles choreographed by Mr. Taylor. Recognized for her versatility, musicality, strength and sensitivity to movement, Michelle Fleet is described in the New York Times by Gia Kourlas as “Strong and musically sensitive, dances as if movement is melting off her body.” Ms. Fleet has been featured in commissioned works by Larry Keigwin, Doug Elkins, Doug Varone, Brian Arias, Margie Gillis, Pam Tanowitz and Kyle Abraham. She has also performed in works by Bill T. Jones, Merce Cunningham, Kevin Wynn and Corbin Dances. In 2019 Ms. Fleet was honored as a Bronx Dance Icon, she has been highlighted in Dance Magazine, Dance Spirit, Self, Elle, TimeOut and other notable publications. In 2006 Ms. Fleet earned her M.B.A in Business administration from NYIT. As an entrepreneur Ms. Fleet is founder and CEO of Suri & Caya Fiber Art Designs. Ms. Fleet is also a co-founder of the Asbury Park Dance Festival.