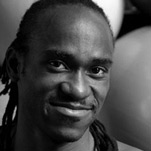 Fabrice Lamego joined Elisa Monte Dance 1998 as a dancer and has served as Rehearsal Director and Assistant to the Director for the company. Fabrice has won acclaim for his technical and artistic proficiency and for the energy and sheer joy that infuses his performances. An alumnus of the Alvin Ailey School, which he attended on a French government scholarship, Fabrice also won First Prize in the 1996 National Competition of Dance in Paris. Fabrice has taught dance in New York; New Jersey; Barbados; Bratislava, Slovak Republic; Lyon, France; Paris, France; London, UK; and Guadeloupe French West Indies. Fabrice has danced in Russia, Switzerland, Italy, Germany, Austria, France, Portugal, Slovak Republic, Singapore, The Philippines, Barbados, Martinique, Guadeloupe, Brazil, London, and through out the United States. Fabrice has created a work for the Elisa Monte Dance Company as well as works for the Ailey School, and his works Requiem and L’Envol are in the NJDTE Repertory. He is currently the director of Pilates Pour Tous Studio.