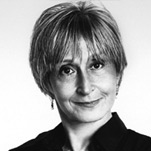 One of the most respected and popular choreographers of our time, Twyla Tharp is known for pieces that combine elements of classical ballet with jazz and modern dance techniques. As the San Francisco Chronicle has written, “virtually all dance techniques are mutually compatible in Tharp’s universe, where the classical and the unclassifiable tend to smile side by side.” Tharp’s professional dance debut came with the Paul Taylor company in 1963; beginning in 1965, she ran her own companies for more than two decades. After merging her company with the American Ballet Theatre in 1988, she served ABT as a lead choreographer until 1991. At that time she reestablished Twyla Tharp Dance, which continues to tour internationally. Over her long career she has choreographed for the Joffrey Ballet, New York City Ballet, Royal Ballet, Paris Opera Ballet, and others, working with such greats as Mikhail Barishnykov and Jerome Robbins along the way. In 1973 she collaborated with Robert Joffrey on Deuce Coupe, a piece set to songs by the Beach Boys; almost thirty years later the pop songs of Billy Joel provided the basis for the modern dance performance Movin’ Out (2002), which has proven a hit on Broadway. All told she has choreographed more than 125 pieces, working in film and television as well as the stage. Notable works include The Fugue (1970), As Time Goes By (1973), When We Were Very Young (1980), Sinatra Suite (1984), Cutting Up (1991), and The Beethoven Seventh (2000).